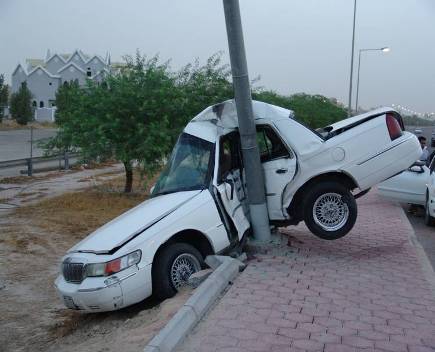 Click here for a full size image.
This has got to hurt. How fast were they going?

A typical scene, though usually you see rollovers. Every weekend in the morning you can see the results. Usually in the 30 km drive into the city there are a couple along the way. And they don’t actually take away the damaged vehicles right away if they are off on the side of the road. You’d think this would remind people better on driving more safely. The problem is, once you spin out if you don’t fly off and do this, you’ll catch a wheel in the soft sand at the side and roll. 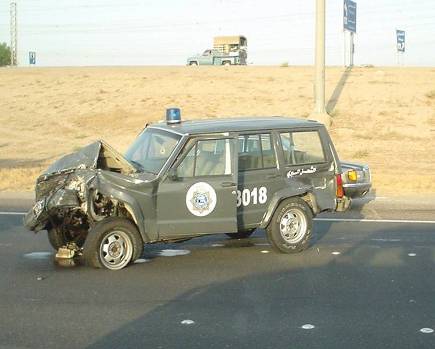 Click here for a full size image.
This police vehicle had just flown by my friend when it hit the side of a large truck. How do they explain this to the boss?
Well, I’ve been doing it firsthand for three months now. I’m gettign used to it. It isn’t easy and has many hazards. But it can be done.

The average is three deaths per day, two being pedestrians.

Of course, no right of way for pedestrians. But also they take chances. You have to assume that even on a side street the car is going 150 kmh and not cross.

Click here for a full size image.
Here is a classic example of bad driving moves in combination. By the type of car this is most likely a military person on the way to the air base.

The passing vehicle had just passed a car and war parallel with my friend. He keeps a camera on the dash, so he just presses the shutter to get hte photo. Then while out to pass, note the so called passing area ends with the white line becoming dashed, and it is nearing an uphill and after the bus there is another car to pass. Well, the good point is these Caprices have serious power for passing. 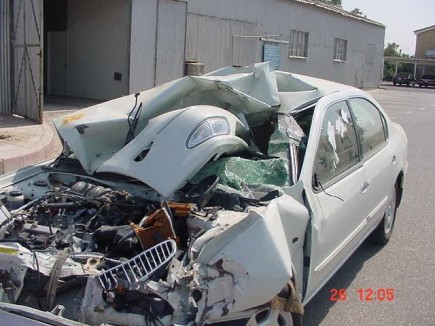 Click here for a full size image.
This one hit the back of a boat that was being pulled on a trailer. 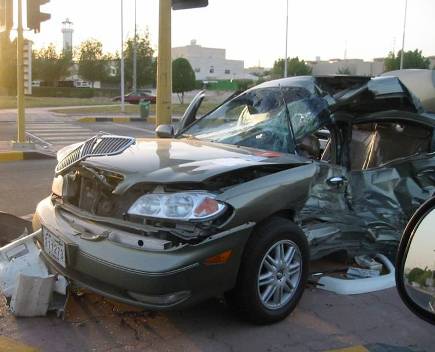 Click here for a full size image.
This one was a Nissan SUV.

The other day I was cruising on a side road — not at 150 — when my intuition told me that because there was a boulevard in the middle with trees that there might be a pedestrian or someting. Well I eased up on the gas and sure enough, out of the shadows, making a dash. Well of course, he was OK. This time.

Lose concentration for a minute and you are sure to be ploughed down by a raving lunatic in a hulking SUV. As the article said in the Friday Kuwait Times, Cars lher love to wrap themselves areound lampposts, kiss the derriere of the vehicle in front and hug pedestrians. How sweet.

Oh and there are lots of traffic circles. The one in the center of the city, has six roads out and many lanes. I’m not sure who has what right of way.

So what to do? Drive defensively with the right amount of agression. What does that mean?

One response to “Driving in Kuwait”