Not too impressive a profile. There were four of us on the boat. Instructor with a student and I was to dive with another person. But he didn’t check his gear assuming the dive center would pack his wet suit. Well, no wet suit for him so he didn’t dive.

One observation is how finning into the current just to stay stationary sucks down the tank of air at least twice as fast as normal!

Good thing I’ve been going to the gym! All that finning gives the legs a good workout. Lately I’ve been working out on the rowing machine and that seems to be more specific to the muscles used for finning. 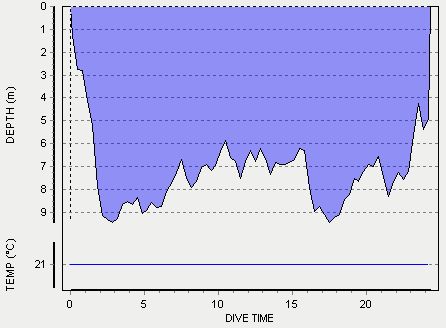 This dive was more interesting. Actually fun! Though many people wouldn’t say it was fun. Three of us went around the reef to the wreck which is an old cement barge on the bottom about 7 meters down. Very strong current and 1 meter visibility but floating around, practicing my improved buoyancy control gained from time in the pool. All in all I enjoyed it and so did the others.