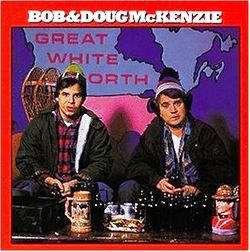 Two guys from Toronto die and wake up in hell. The devil stops in to check on them and sees them dressed in parkas, mittens and toques warming themselves around the fire.

The devil asks them, “What are you doing? Isn’t it hot enough for you?”

The two guys reply, “Well, you know, we’re from Canada, the land of snow and ice and cold. We’re just happy for a chance to warm up a little bit, eh.”

The devil decides that these two aren’t miserable enough and turns up the heat. The next morning he stops in again and there they are, still dressed in parkas, toques and mittens. The devil asks them again, “It’s awfully hot down here, can’t you guys feel it?”

Again the two guys reply, “Well, like we told ya yesterday, we’re from Canada, the land of snow and ice and cold. We’re just happy for a chance to warm up a little bit, eh.”

This gets the devil a little steamed and he decides to fix these two guys. He cranks the heat up as high as it will go. People are wailing and screaming everywhere. He stops by the room with the two guys from Canada and finds them in light jackets and bucket hats, grilling sausages and drinking beer. The devil is astonished, “Everyone down here is in absolute misery, yet you two seem to be enjoying yourselves.”

The two Canadians reply, “Well, ya know, we don’t get too much warm weather up there in Toronto so we’ve just got to have a cook-out when the weather’s THIS nice.”

The devil is absolutely furious, he can hardly see straight.

Finally he comes up with the answer. The two guys love the heat because they have been cold all their lives. The devil decides to turn all the heat off in hell.

The next morning, the temperature is below zero, icicles are hanging everywhere; people are shivering so bad that they are unable to do anything but wail, moan and gnash their teeth. The devil smiles and heads for the room with the two Canadians. He gets there and finds them back in their parkas, toques, and mittens. Except now they are jumping up and down, cheering, yelling and screaming like mad men!!!

The devil is dumbfounded, “I don’t understand, when I turn up the heat you’re happy. Now it’s freezing cold and you’re still happy.

What is wrong with you two???”

The Torontonians look at the devil in surprise, “Well, don’t you know? If Hell’s frozen over, it must mean the Leafs have won the Stanley Cup.”