In quest of a cultural life we went to the Gulf Jazz Festival first night with the two kids. The musicians were very good. Here’s an interview.

First on piano the Swedish

Then a group came on stage with Ricky Ford the American alto sax player. He doesn’t have much of an up to date web site also!

And there was also the guitarist Jarek Smietana. He has a somewhat better web site! 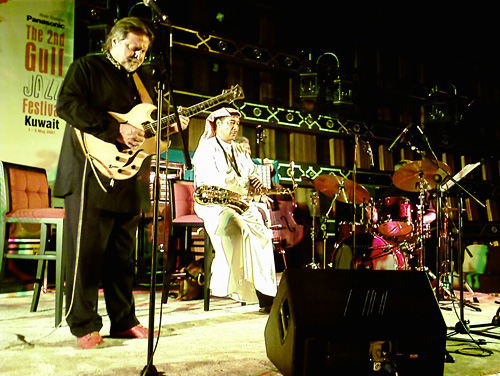 And spontaneously they had Karen Edwards come up at the end and do two songs. She’s got a nice warm voice and apparently though known as a singer she plays a mean piano.

And on the final night we saw the Rosenberg Trio Three brothers headlined by Stochelo, one of the best guitar players I’ve every seen. Quite enjoyable. Stochelo’s inspiration is Django Reinhardt

No photos of the final night. There were more people as it was Thursday night and we were sitting further back, not possible to take photos with the camera phone. On the first night we were in the front row.