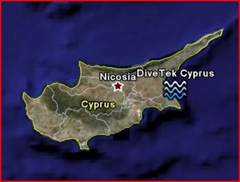 I flew to Cyprus via Jazeera airways. Jazeera is a private low cost airline operated out of Kuwait using a small fleet of A320 airplanes. They have a good online booking system which enables you to change flights easily. Though they do sneak in a credit card charge for any changes you do. Their fares start very low well in advance and then go up as the flights fill.

The flight left Kuwait around midnight and I arrived in Cyprus at about 2:30 am. I had prebooked a rental car online at Advantage. I use Expedia normally to check who’s the cheapest and then go directly to the car company’s site to book as Expedia is the same price.
I was met by the Advantage representative at the airport. He said I was upgraded to a better car than what I booked. I had booked the lowest priced automatic with air conditioning. I did not what to try to shift gears with my left hand while learning to drive on the left side of the road. So I got a Ford Focus with about 40,000 km on it. It was a nice car. Aside: I did realize a few days later on that I was driving a car with no paperwork. Maybe that is standard for rentals as they do have special license plates?

So in the middle of the night I headed out to drive to Protaras about 50 km to the north of the airport where the diving center is located to start the course at 9:00 am.  I kept thinking left, left, left as I was advised as I’ve never drive on the left hand side of the road. And also, to remember left when entering traffic circles which are frequent in Cyprus. What a delight to be in fresh humid air, no dust and seeing the stars!

My plan was to take my time driving and pull off somewhere quiet and sleep a bit on the way there.
Cyprus has a well developed freeway system which I followed and then pulled off on the way there into Agia Napa out of curiosity and as I had the time. Regarding driving on the left side of the road, I did notice that after passing a parked truck on the left of the road I realized that I amost ripped off the left side of the car being too far to the left as I was being very cautious about going to far to the right into the oncoming traffice. After over thirty years of driving sitting in the seat on the left side of the car, it is a change to the space perceptions.

Well, at 3:00 am, all the young partiers in various states of inebriety were walking, on motorcycles and quads were making their way home. That is, making their way back to their hotels. Agia Napa is a party place to say the least.

I pulled off near the beach and tried to rest but there were quads and cars coming and going so I moved away from the beach and got a bit of sleep.

Upon waking I was hungry so on the road I stopped at a bakery for some food. I was parked around the back and as I went to the car I noticed a young foreign couple seated closely face to face on a quad bike looking overly amorous and though they aren’t going to do that are they. Well yes they started. I should of taken a photo, but better judgement said just leave.

p>So that’s Agia Napa for you. And later on I asked a Cypriot and they said all of this is typical for that area.
Arrived at the dive shop after a bit of driving around and enquiring at another dive center. There are many dive centers in Cyprus but Dive Tek is the only dedicated technical diving center in all of Cyprus.