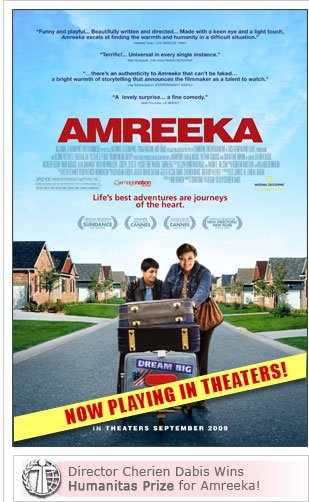 This post was triggered after I watched a feature on new movies on CNN in the gym last Sunday. I can’t find any reference to it on the CNN website though.

They had a feature on the new movie Amreeka (how America is said in Arabic). It is a new award winning comedy about a Palestinian mother and her children that immigrate to the US. It tackles some stereotypes and from the looks of the trailer is very funny.

It was produced by Cherien Dabis a Palestinian American independent filmmaker. Sheâ€™s first of her family born in the U.S. and was raised by Palestinian/Jordanian immigrant parents. She grew up in Ohio and Jordan but currently resides in New York City. 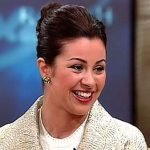 The movie was co-produced by Zain Al Sabah. She is a member of the Kuwait ruling family. Her great Uncle is the former Emir Jaber Al-Ahmad Al-Jaber Al-Sabah. She was featured on the Oprah Winfrey Show in 2004 when she was 30 years. It was a fairly shallow interview but you can see that sheâ€™s obviously intelligent and poised. A summary of her interview is.

And Zain created a stir when she announced she wanted to marry a commoner instead of following the old Kuwaiti tradition of marrying your cousin to preserve the family name and wealth. Now Zain lives in a stunning home with her husband’s parents, which is common for young married couples here, but she is building her own home, complete with a pool, gym, tennis court and theater.In this tiny, oil-rich country, wealth is not reserved just for royals. Zain explains Kuwaiti citizens get free education through college, free medical care and they don’t pay taxes! When a Kuwaiti couple gets married, the Emir gives them a $12,000 wedding gift! Most native Kuwaitis also enjoy extravagant lifestylesâ€”mansions, servants and lots of shopping. For example, Zain says her friends fly to Paris and Milan just to buy their wedding dresses. "You don’t have to worry about your college education, so why not spend that money on your daughter’s wedding gown?"There are freedoms that Kuwaiti women do not enjoy. Though it’s considered one of a few democracies in the Middle East, women do not have the right to vote. "There’s nothing I can tell you right now that can justify that," Zain says. "It’s a basic, civil, human right. We’re considered to be a democratic country. Obviously that democracy is kind of lopsided. I don’t mind at all taking it one step at a time. Because, you know what? When the women come on the scene, it’s going to be amazing

I must say her comment on the free medical care is a misleading. The quality of the government provided medical care here is not very good so people with money go to private hospitals of which there are many. They do though, get to travel abroad for medical care which can be a perk as I believe a relative gets to accompany them. This costs the government a lot of money which doesnâ€™t stay as an investment in Kuwait to improve the medical care for everyone.

Zain was the producer of the movie listed on IMBD, Dance Can Do All That which stars Shivani Thakkar as herself. Shivani was born in Calgary. Shivani is a Bharatanatyam dancer. There is only one Dance Reel video of her which is quite impressive. She is very quick and light on her feet.

There is a feature on her in the University of Southern California newsletter which she explains how her parents stayed behind to help Kuwaitâ€™s exiled government during the war in 1990.

Home-Grown Hero Kuwait native and USC alumna Al-Zain Al-Sabah explores her parentsâ€™ activism in a moving documentary. Like most adolescents, 15-year-old Al-Zain â€œZainâ€ Al-Sabah MFA â€™04 thought she knew her parents. Curfew-givers, homework monitors, detractors of teenage fashion â€“ they were just, well, parents. But on the morning of Aug. 2, 1990, Iraq invaded Kuwait, Al-Sabahâ€™s homeland, and forever dispelled those childhood assumptions. She, her siblings and their grandparents were stranded in London while other members of the Al-Sabah family, the ruling family of Kuwait, began to flee the country. But Al-Sabahâ€™s parents, Shaikah and Sheikh Sabah, stayed behind, joining the movement to free Kuwait and return its exiled government. Years later, Al-Sabah delved into the â€œwhyâ€ with The War that Hit Home, a portrait of her parentsâ€™ roles in the Kuwaiti resistance during the seven-month Iraqi occupation. Though she spent her early career working in television in New York and Kuwait, eventually she realized that what she really wanted to be was a storyteller. â€œThere arenâ€™t many Arab filmmakers out there,â€ she says. â€œOur voices really arenâ€™t heard at all.â€ Soon she came to USC to pursue a masterâ€™s degree in film and television and found a mentor in Oscar-winning documentary filmmaker Mark Jonathan Harris, whom she describes as â€œjust extraordinary.â€ When the time came to develop her thesis project, Al-Sabah wanted to make a documentary that would explore her parentsâ€™ activism and illuminate â€œwhat it means to be from Kuwait, to be an Arab, to be Muslim.â€ The 40-minute piece details her parentsâ€™ struggle through emotional interviews and archival footage. Itâ€™s Al-Sabahâ€™s personal journey into the struggle, however, that gives the film its resonance. â€œThere are so many deep questions that come out of this subject matter, but I guess thatâ€™s what makes a good film. The more interpretations, the better,â€ she says. Al-Sabah and her documentary will soon return to the U.S. to make the festival rounds. Meanwhile, she is developing several more documentary projects with the aim to challenge monolithic views of the Middle East, particularly of Middle Eastern women. â€œI canâ€™t stress enough that itâ€™s literally a sense of duty that I have,â€ she says.